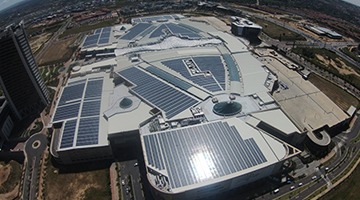 Solareff (Pty) Ltd has the pleasure to announce that the Mall of Africa’s Solar PV system has now entered its sixth month of operation! Covering an area of approximately 45000m² or 4.5ha, this record‐ breaking project is not only the largest rooftop Solar PV system of its kind in the Southern Hemisphere and 10th worldwide, but, as far as can be established this system is also the world’s largest integrated rooftop PV/Diesel hybrid solution.

This solution is hugely significant for South Africa’s solar PV industry as Solareff, Attacq and Atterbury successfully worked through a lengthy legal process together with NERSA and Eskom to ensure full commercial and legal compliance of the solution – the first of its size in South Africa!

“The Mall of Africa installation was closely watched by industry players and regulatory bodies alike – as it was the largest rooftop project to be undertaken within South Africa, and as it was a Grid‐Tied solution it meant that Solareff would also be the first to successfully legally synchronise the system with the national grid through Eskom’s Grid Access framework” says Solareff COO DeVilliers Botha.

The process to legally synchronise the system with the national grid took a period of 23 months and included various administrative and technical engagements with both Eskom (the utility) and NERSA (the local energy regulator). On 21 March 2018, Solareff had the honour of energizing the system – making the Mall of Africa Solareff’s landmark site, for legally connecting a rooftop plant on an Eskom connection.

“The Mall of Africa is an Eskom Medium Voltage (MV) customer, which made the application and final connection of the Solar PV system possible under the current Grid Access framework. The Eskom technical application process ensured that additional MV protection was put in place, such as reverse feed blocking, synchronisation checks and upgrading of protection equipment. The solar system is grid‐tied and produces power for self‐consumption; meaning that all of the electricity generated from the sun is utilised during the mall’s seven day a week load profile” explains Botha.

The energy generated by the solution supports the Mall’s day‐to‐day power requirements while decreasing its overall Carbon footprint. The solution is estimated to produce 7 800MWh annually. The resulting reduction in consumption will alleviate pressure on the National Power Grid, allowing for greater available capacity to support the substantial growth currently experienced in the Waterfall area.

“This is an exciting project for us to launch at a time where energy transition towards renewables is accelerating worldwide. Attacq is well known for its focus on sustainable building and we constantly strive to push the boundaries of innovation. This is another significant step in our sustainability journey “says Michael Clampett, Head of Retail Asset Management at Attacq.

Atterbury Property played an integral role in the installation of the Solar PV system. Managing Director of Atterbury, James Ehlers stated that the company had long ago realised the importance of integrating solar-smart solutions into their building: “this Solar PV system is just one of many that we will be installing across our portfolio.”

This solution is comprised of the following:

Emergency Hotline: 0800 029 999
WhatsApp Support Line: 0600 123456
We use cookies on our website to give you the most relevant experience by remembering your preferences and repeat visits. By clicking “Accept All”, you consent to the use of ALL the cookies. Privacy Policy
Accept All
Manage consent

This website uses cookies to improve your experience while you navigate through the website. Out of these, the cookies that are categorized as necessary are stored on your browser as they are essential for the working of basic functionalities of the website. We also use third-party cookies that help us analyze and understand how you use this website. These cookies will be stored in your browser only with your consent. You also have the option to opt-out of these cookies. But opting out of some of these cookies may affect your browsing experience.
Necessary Always Enabled
Necessary cookies are absolutely essential for the website to function properly. These cookies ensure basic functionalities and security features of the website, anonymously.
Functional
Functional cookies help to perform certain functionalities like sharing the content of the website on social media platforms, collect feedbacks, and other third-party features.
Performance
Performance cookies are used to understand and analyze the key performance indexes of the website which helps in delivering a better user experience for the visitors.
Analytics
Analytical cookies are used to understand how visitors interact with the website. These cookies help provide information on metrics the number of visitors, bounce rate, traffic source, etc.
Advertisement
Advertisement cookies are used to provide visitors with relevant ads and marketing campaigns. These cookies track visitors across websites and collect information to provide customized ads.
Others
Other uncategorized cookies are those that are being analyzed and have not been classified into a category as yet.
SAVE & ACCEPT